I tried to trick Dixie into thinking something happened to the hood of her van. This is what she saw. 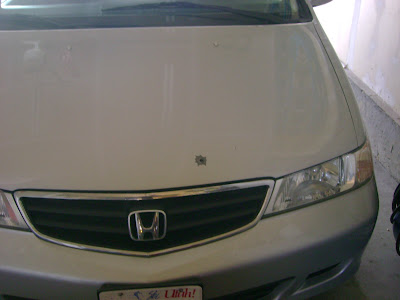 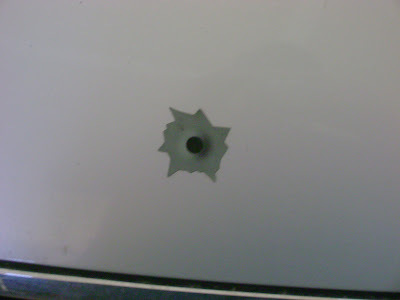 Its just a magnet that sticks. She said I didn't fool her but I bet I did. It looks pretty realistic until you touch it. I think I will put it on somebodys car next so watch out!
Posted by The Bug Boys at 6/25/2010 04:48:00 PM No comments: Links to this post 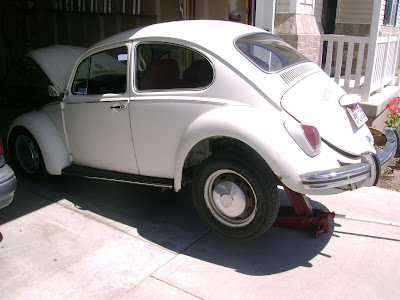 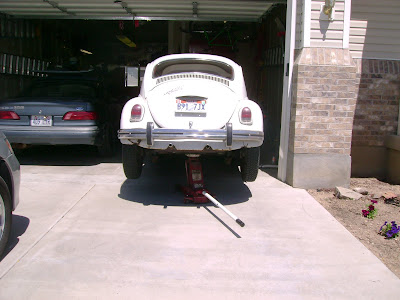 Well, the bug spent some of Saturday on jack stands again. Driving home Friday from work it started running rough. I pulled the top of the carburetor off and found the float bowl full of junk. I had a fuel filter on it, but when I pulled the gas tank out the last time I removed it with plans on installing it back closer to the engine so it would filter out anything in the fuel line. I got lazy and did not get around to installing it. That's usually how I work. I like to put things off until I have to accomplish them. Just ask my wife, she will tell you. Anyhow after cleaning the carb and idle jet out again I installed the fuel filter. Here it is. 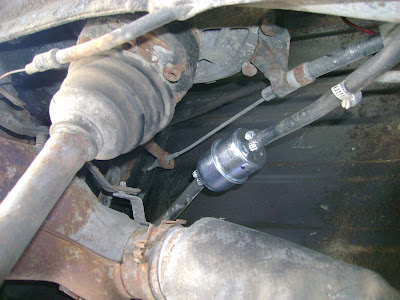 It is running good once again and I learned that fuel filters are needed just in case anyone was wondering. While I was under the back of the car I decided to put the rubber snubbers on the bump stops. I had removed them because it was too low to use them at their stock height. I had to cut them down a bit. 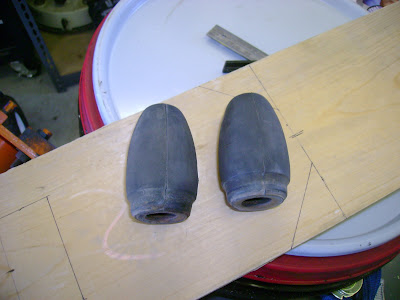 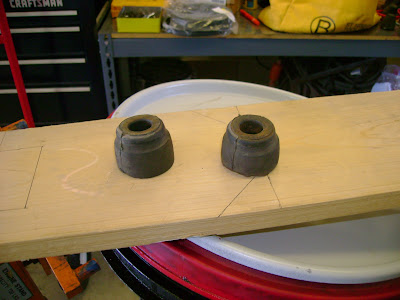 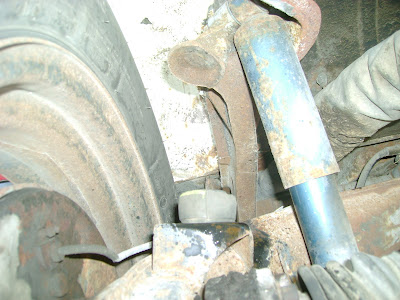 I took it for a test spin and it was nice not to have the metal to metal contact. The whole family is going to pile into the bug tonight and head over to Kohl's so that will really be the test.


I also had the chance to change the exhaust. It makes it sound much better. I have never liked the high pitch noise stock bugs make. I went with some bigger tips but they are still quiet. I guess I am getting old. I like my exhaust a little quieter now. Here is the before pic 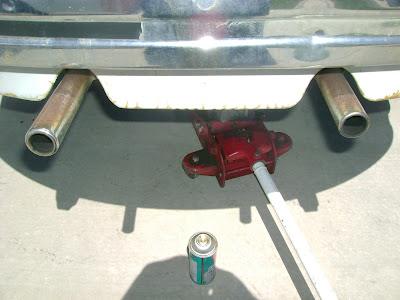 And here is the after pics 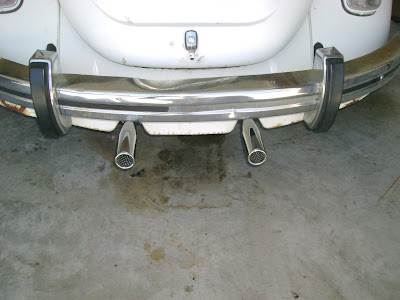 Well that's how Saturday went along with fixing some sprinkler valves and heads, and working on the neighbors Ford. I guess its time to hit Kohl's (Dixie has a coupon that's going to expire).
Posted by The Bug Boys at 6/19/2010 05:24:00 PM No comments: Links to this post

I have been trying to take my camera everywhere I go in the bug. The reason is I play a game on the Internet with some local VW enthusiasts where someone tells everyone where to take a picture with their VW. Some examples are your VW at a fire station, or at a cemetery, or by a train. You get the picture. Anyways the first one to post a picture gets to choose the next place for a picture. The last one was a picture of your VW going fast. Here was my pictures. 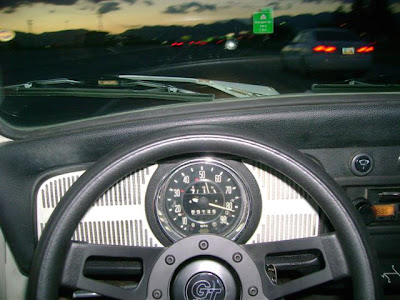 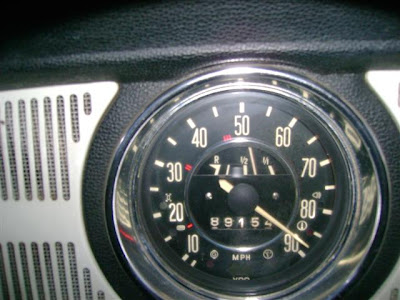 I know, I know taking a picture while driving doing almost 90 is dumb in the first place, but trying to do 90 in a bug at 5:30 in the morning while taking a picture is really dumb. Its all for the right to choose the next place for a picture to be taken. The crappy thing is someone beat me with a picture so it was all for nothing. Oh well, better luck next time!
Anyways I had my camera at work because of this game and couldn't resist taking a picture of my friend working on an engine. Yes he really is actually working on the back of the engine. This is not set up for a funny picture. 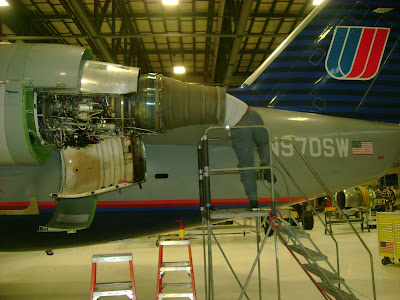 This is what he is working on and looking at. 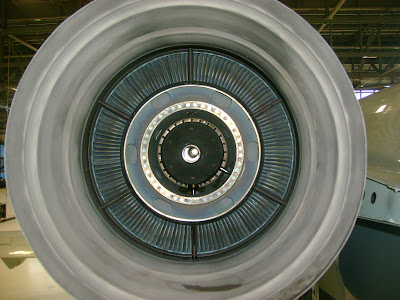 We were chasing down an oil leak and ended up changing an O Ring back there.
He has threatened to sue me if I post this on my blog but I told him he didn't have a leg to stand on because his face wasn't shown. Besides it will most likely end up on all the computers at work anyways. :)
Posted by The Bug Boys at 6/18/2010 06:04:00 PM No comments: Links to this post

Having a Hail of a time!

So Thursday I get off work and start driving home. The next thing I know is I hear some horrible noises coming from over my head. It sounds like some mad man is on top of the bug and using an ice pick to bust through the roof. It isn't long after that I realize I can't see through the windshield. I was driving in a hail storm and it literally sounded like I was driving down the road in a metal shed. I guess in 1969 they didn't believe in putting anything between your head and the metal roof except a thin piece of vinyl that makes up the headliner. I made a mad dash to Auto Zone to get some new windshield wipers so at least I could see the road, but of course they don't stock that small of a windshield wiper. I bought some Rain-X and made my way home.

I did get a picture of the odometer on the bug reading 88888 miles. Pretty cool. 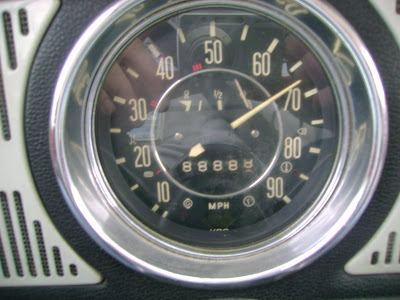 I decided that if I was going to drive this everyday I better be more prepared. I found and bought some new windshield wipers. I think the old ones were the original ones from 1969. They did a good job of streaking the water and making muddy streaks all over the windshield. I also bought some new headlights and I did Rain-X the windshield. If anyone out there has not used Rain-X, I highly recommend it. It is worth its weight in gold in my book. I use it on all our vehicles.

I also bought a new steering wheel. The new one is smaller in Diameter and makes it so much easier to get in the bug. I had to modify the turn signal because it was so close to the new wheel. My Dad would call it custom junk. I guess it is but it is a lot more comfortable. I also spent some time looking at the front seats and found out how to adjust them. I am in phat city now, I have enough room that it feels like I am in a Cadillac. Well until I hit a bump, or need to turn without power steering, or as I am looking for the AC button, or when I hit the gas to pass someone, etc..... 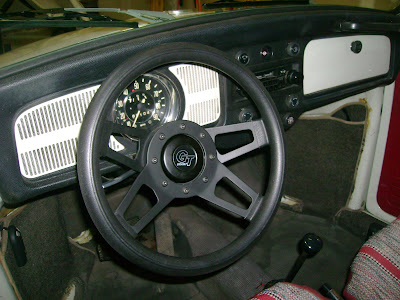 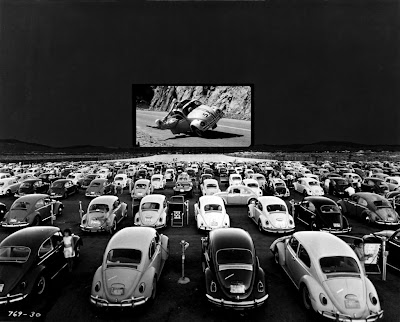 I came across this old picture and had to post it to the blog. I think this is such a cool photo. It reminded me of my first bug. I was in a bug club and they had nights where they would meet somewhere and then everyone would cruise to another location. This night we met at hires in downtown Salt Lake. We ate dinner and from there we went to a drive in theater in West Valley. There were a lot of VW's and we all lined up and drove to the drive in. It was a blast, I took my brother with me and whenever anyone got stopped by a red light everyone would pull over and wait for them to catch up. I still remember all the VW's lined up at the drive inn. I wish I would of taken a picture. I don't remember what movie we saw, ( maybe my brother does?) but I remember having a good time. I wish there was a club in Salt Lake like the one back then. There is a club but most of the members are in the Ogden area so they do all their stuff up there. It makes for a tight schedule to go after work up to Ogden and make it home at a decent hour. Oh Well, maybe I ought to start one in Salt Lake.
Posted by The Bug Boys at 6/05/2010 07:33:00 PM No comments: Links to this post

Well, I was looking at JC Hackitts web site and found this picture at the Arctic Circle cruise night last month. 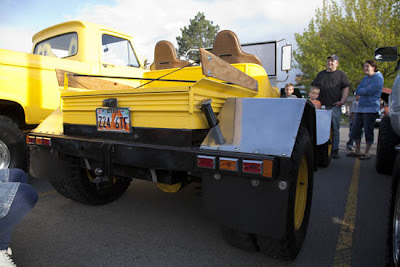 If you look real close in the background you can see the whole family. I think we all just finished eating ice cream cones at the time. Dixie looks really interested in something. I promised the boys we would take the bug to a cruise night when it was up and running. Maybe next thursday we will go.
Posted by The Bug Boys at 6/04/2010 05:53:00 PM No comments: Links to this post

Camping and the Bug

As most people know, our Family loves to camp. I have come up with a way to go camping and enjoy the bug. It saves money on gas to boot. I just need to find one of these trailers and we will be all set.

Well, School is about out for the boys and I see a long summer with lots of potential. Hopefully work doesn't go crazy so we will have some weekends to go camping. It may not be in the bug but I am sure it will be fun. Dixie is dying to go to Yellowstone and with any luck we will make it there this year.

We drove up to Magna and got some pictures overlooking the valley. The only thing that would make it better is if there was a sunrise. 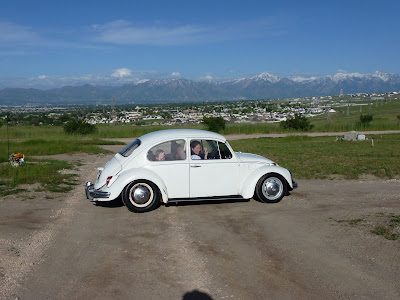 The bug has bugs on it!

Well, its been awhile since we posted. The bugs been running good and has been a great car to go back and forth from work in. It has bugs all over its windshield! Its getting 28.7 miles to the gallon and I am hoping it will go up. I just need to quit hot rodding it around. It goes good on the freeway and has lots of pep. It is hard to get a jack underneath it. This picture shows the dilemma. 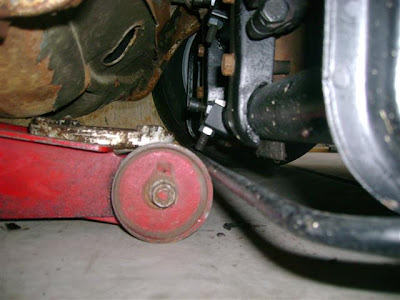 I have to drive it up on some 2x4's and then lift the front some more to get the jack under it. Now that the front end is done we shouldn't have to jack it up much. Here is a picture of the inside. 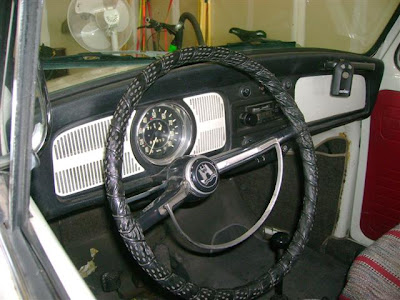 It is pretty much stock and has an older radio with one speaker behind the dash. It plays good and seems to fit the bug so I will keep it. I have never been one to spend money upgrading a stereo.
Here is the engine and the new distributor and carb that we rebuilt. 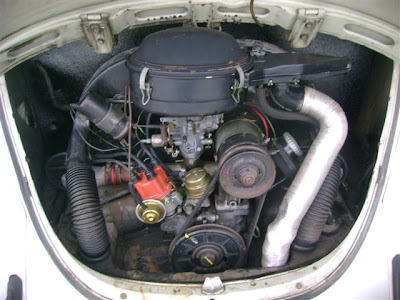 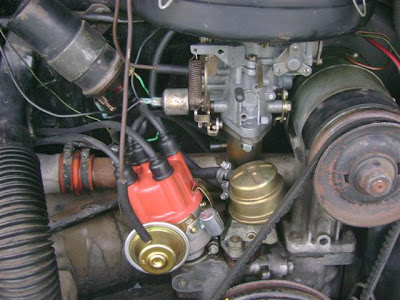 We need to spend a Saturday and install a engine seal and do some cleaning to it. The next upgrades the bug will get is an exhaust system (so it won't sound like a stock bug) and new bumpers. The bumpers on it now are really rusted and look bad.
That will be down the road because there are other more important things to spend money on at the moment. If you see us on the rode give us a honk.
Posted by The Bug Boys at 6/01/2010 07:29:00 PM No comments: Links to this post