So awhile back I listed my top 10 car songs. The garage has been a little slow so I decided to post up my top 5 favorite car movies. These are movies that I watched over and over as a kid and they must have helped fuel my love of cars. Some of the movies are really old and some had been made at the time I was growing up. Here they are in order of my favorites.

1: American Graffiti.  This is an old show that I absolutely loved. I could picture myself as John Melnar driving a deuce coupe around and getting in races. I own this movie and still watch it to this day and love it. I fast forward through the prom part of the movie because that's boring. I love watching it and seeing all the cool cars that are cruising up and down the streets in it. This is most likely the reason that a 32 Ford is my all time favorite car that I will have one day if I am able to.

2: My Science Project.   I remember the first time I saw this movie. We rented it from a store and at that time we rented the VCR also. They were expensive so the video stores would rent the machines. They were about the size of a Cadillac at the time and it was always fun trying to get them to work on your TV. I own this DVD and watch it when I feel nostalgic. I didn't really fit in with any group of people in High School. I played football but didn't really hang out with the jocks, I was around the stoners and cowboys a lot because I wanted to be in my car at lunchtime and they were always in their cars chewing or smoking and they also had all the shop classes I had but I wouldn't really say I fit in there either. I dated a girl that was in honors classes and music classes but didn't fit in with her friends too well. I would of called myself a motor head I guess. That's why I love this movie. I relate to Harlan (He's the one with the red GTO) and so I guess that's why I like it. I only watch it up to the point that it gets dumb and then I shut it off. It drives Dixie nuts but that's what I do.
3: The California Kid.  I actually didn't see this movie until I came home from my mission but it's just a super cool car movie. It has martin sheen in it and I actually like his character for once. I have a VHS copy of this one that I taped off the TV. I haven't ever seen it on DVD but if I could find it I would buy it.
4: Better Off Dead.  This isn't really a car show i guess but it has some hilarious parts in it. My favorite part is where he fixes his camaro with the foreign exchange student who is a girl. It's a really cool camaro and a pretty funny movie. This is another one that I have on VHS and it's a copy from another tape. It works for me though. I watched this a lot in my younger years.
5: Christine.  I had to include this one. I watched this when I was younger but since I have had kids, Dixie and I decided that we didn't want to watch movies that we wouldn't let our kids watch. That pretty much limits it to G ratings and some PG's It's funny because the language in this movie is horrible but I didn't remember hearing that when I was a kid. Not sure why but it sure makes me uncomfortable now. Anyways, I wouldn't recommend watching this one but it's got some cool cars in it and I like the music.
That's my car movie list. I know there are lots of other ones like vanishing point, 2 lane blacktop, cannonball run, gumball rally, the duel, maybe the blues brothers but these would be my top 5. I have never really seen any of the new ones out like the fast and the furious and others like it but they never really peaked my interest. You can see all these movies in there entirety on you tube. just type in their titles. I highly recommend the first 4 on my list. Let me know if you watch them and give my some names that you think I should of put on. I'm always up for a good car movie. Oh I just thought of one. Here it is.

Bullitt. This has the all time best chase scene in a movie that I've ever seen. This would actually rank around 3 on my list. I can't believe I forgot it until now.  Very cool movie, Check out the chase scene!

I figured I would post my favorite thanksgiving picture again this year. Thanksgiving is my all time favorite holiday of the year. 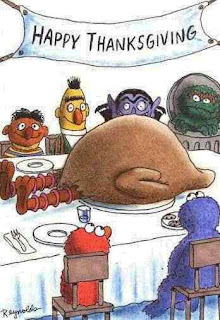 I hope everyone has a nice warm place to enjoy a good meal with family and friends this Thanksgiving. Remember to take some time today to think about the blessings in your life. Keep safe and Happy Thanksgiving from the Olson's
Posted by The Bug Boys at 11/22/2012 10:19:00 AM No comments: Links to this post

So the other day it was super windy for a couple of days. I drove the baja on those days and coming home was not very fun. I had to shift down to 3rd at times just to keep up enough speed on the freeway. That's not very fun, especially when everyone is usually going 10 to 20 miles over the speed limit. I decided enough was enough. If you read my blog you know that I found some exhaust pipes off a victory motorcycle and adapted them so they would work on my baja. I was looking to quiet it down and to give the engine some back pressure in hopes that it would run stronger. What happened was I lost some power on the lower end and a lot of power at higher RPM's. The pipes ended up being really quiet though. Actually they were too quiet for my liking so I decided I needed to do some modifications. I went on some Victory forums and found that they were modifying the stock exhaust by either drilling out the inner baffle with a 1 inch hole saw or drilling 6 to 8 holes in the backing plate of the muffler. Most of them complained about messing up their controllers and needing their bikes to be re tuned because of the computer that controls them. I wasn't worried about a stupid computer so I decided to implement both of the modifications and see where that would get me. 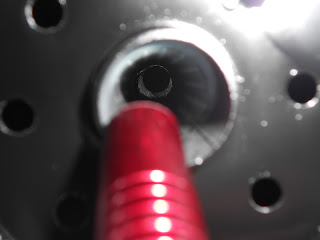 So here you can see down the main pipe of the exhaust. This is where you drill out the baffle, It is about 18 inches down the tube. I rigged up some extensions and drilled out both pipes with a 1 inch hole saw. 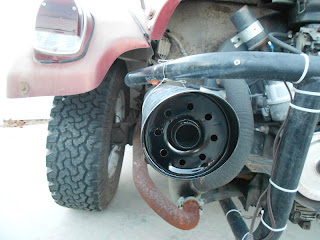 I next drilled out 8 holes in the backing plate of the mufflers. I made a template so they would be uniform and not look like crap. I drilled them out to a final size of 19/64ths because that's the biggest drill that I had handy at the time. I painted the back plates with some high temp satin black paint for looks and took it for a test spin. 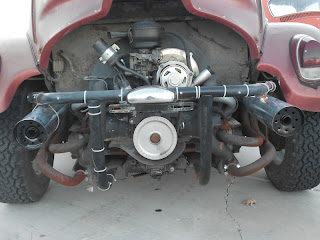 So here it is all the final product. They became a little bit louder but they really aren't that bad. I was surprised by the pleasant sound they have now but at the same time I'm not embarrassed to drive by my neighbors early in the morning. I was even more surprised by the performance increase I gained by doing this. It is a night and day difference. I have lots of power gains through all RPM's and I can go 85 MPH on the freeway again if I need to. I might not suggest doing this to your brand new Victory motorcycle but I highly suggest doing it to your bug that might for some reason have victory exhaust on it.

On a side note, my license plate either vibrated off my bug or was stolen. It may have been blown off by all the wind, who knows. Anyways if you see a plate on the side of the road, check to see if it's mine. They are due this month so I guess instead of registering it online, I will have to go visit my friends at the DMV. Joy, Joy for me.
Posted by The Bug Boys at 11/04/2012 08:59:00 PM 2 comments: Links to this post