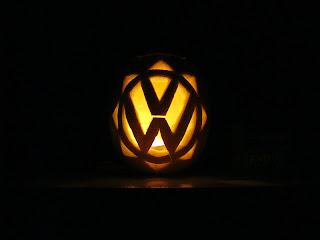 Well, it seems like Halloween has lasted all weekend at our house and we haven't even had Halloween yet! Between the trunk or treats and parties at the boys school they have been in their costumes all week. At least they are getting some use out of them. Tonight we carved pumpkins. It was a fun time. We are roasting the seeds right now and the pumpkins turned out great. Here is all the fun. It turns out that Steven hates pumpkin guts and Dixie ended up removing most of them from all the pumpkins. Isaac transfers the designs on the pumpkins really good and Ellie didn't really know what to think. 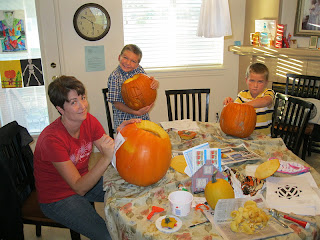 Here she is wondering why I want her to put her hand in the weird orange thing. 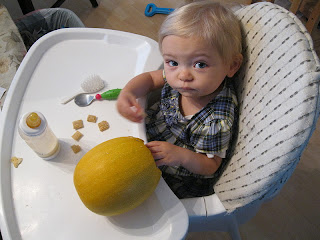 Steven is an awesome carver and spent a lot of time doing his. 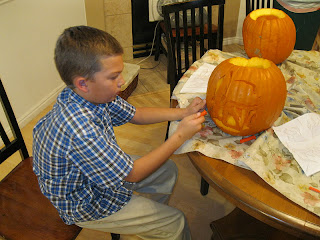 I ended up doing mine and Dixie's because she spent too much time on facebook. That seems pretty much normal. Here I am carving Dixie's. 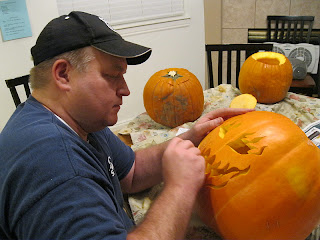 OK See if you can guess who's is who's. 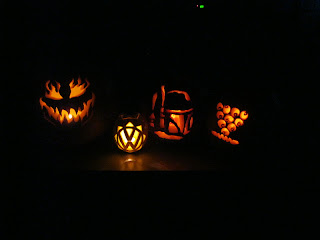 From Left to right:  Dixie's headless horseman, of course my VW one, Stevens Bounty Hunter from Star Wars, and Isaac's alien with lots and lots of Eyes. It matches his name: Eyesaac.  Looking forward to Halloween tomorrow mostly so it will be over, but it is fun to see the kids having fun. Just got the pumpkin seeds out of the oven and they are really good. Happy Halloween Everyone!!!!
Posted by The Bug Boys at 10/30/2011 07:43:00 PM No comments: Links to this post

I decided to get the worn front end parts changed on the baja before it gets really cold here. It needs new ball joints, tie rods, shocks and tires. I am really trying to go as cheap as I can on this so I bought ball joints that I am just going to press in. On my lowered bug I bought all new spindle arms that had new ball joints installed in them already so I didn't need to hassle with pressing them out. When all is said and done, I figured it saved me 37 dollars to press them in myself. Doesn't seem like it's worth it but my labor is free and it was an interesting project. If I haven't said it before, this baja is a rusty mess. Everything I look at has rust and the front end was no different. 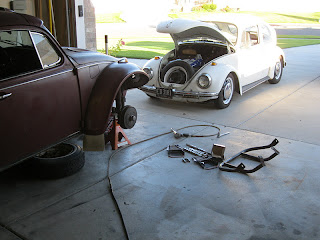 This shot is looking from the spindle on the drivers side through to the passenger side. You can see the tie rods, the steering coupling, the master cylinder and the bottom of the gas tank. 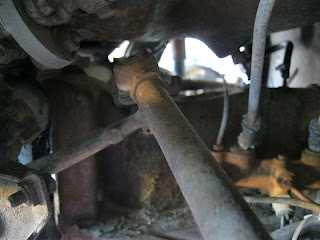 I had to get my rivet gun out and cut a nut off the ball joint because it was rusted on. I have removed the torsion arms here and you can see the torsion leafs. One bad thing I found was that one of the grease Zerk's is broken off the lower tube and it has let a lot of dirt and water in it. I am going to clean it out as best I can and install new grease and see where that gets me. Luckily the torsion arms look OK and the bearings and bushings look to be OK. 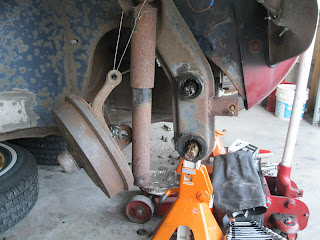 Here the torsion arms are off and on the ground. Lots of years of dirt and crud are built up on them. I can't tell if the ball joints have been changed in the past but with it being 42 years old I would suspect they have. If you look at the lower torsion arm you can see a piece of the shock. It broke right off when I was trying to slide it off. 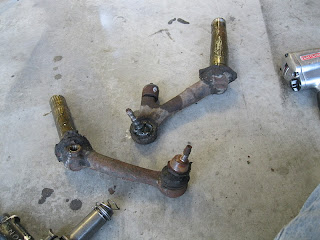 Cleaning them up in the solvent tank. Lots of nasty grease came out of them. 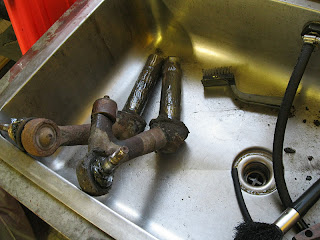 Back in the day VW had a special tool to press out the ball joints. I tried to rent a generic press from auto zone but they were out of them. There is no lip on the torsion arm itself to grab onto so you can press them out. I ended up going for the rivet gun again. I had an easy time with 3 out of the 4 ball joints. The fourth (and last one) was a real pain in the butt. I had my friend Obin help back up the arm as I tried to drive it out. We got it to move about a 16th of an inch and then it wouldn't budge. Moving it out just that little bit allowed me to fit a press fixture on it so I could put it in the press and press it off. It still took a lot of pressure and some heat from a heat gun before it finally broke loose. It sounded like a cannon going off when it finally went. 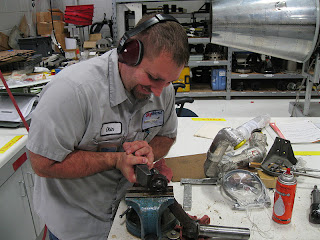 Here is the rivet gun. Everyone in the shop was irritated at me. Oh Well. 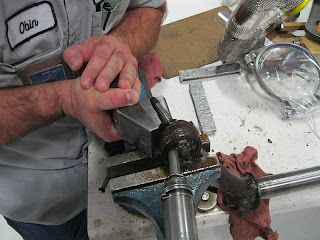 Here is the new joint I am going to put in. I wasn't very impressed with the grease job from the factory. It had one little dab of grease on it. You have to remove the boot to press them on (otherwise you will rip it) so I packed them full of grease before putting the boot back on. 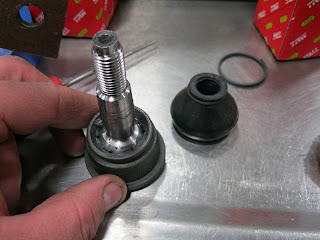 When you press these in the arms, make sure you line up the notches with the marks on the arms. Here is a picture. If you don't they will bind up when installed on the car. If you forget, you need to buy a new joint because you should only press these once. 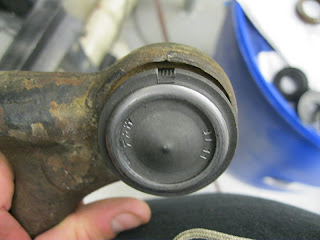 Here is the set up in the press. You can see I had to get a little creative with the tools to press it on. It all worked out really good though. 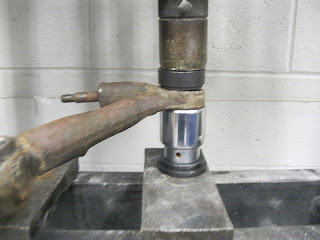 This press works great. I would hate to have to beat a new joint in with a hammer or rivet gun. You can also see if a machine shop will do this for you. I suspect they will charge anywhere from 20 to 60 bucks to do it. 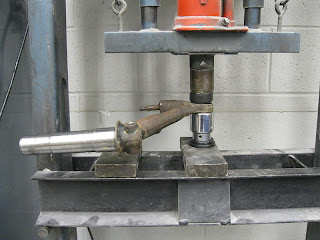 Here they are all done and ready to be installed. I reinstalled all the boots after filling them with grease. I just need to clean out the inside of the tubes on the front end and install everything. I am going to powder coat the bumpers and the tie rod tubes this weekend and then get it all back together soon. 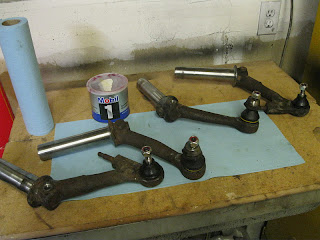 Back to the garage!

Well, It's been a really busy couple of weeks and I haven't had much time to work on either bug yet alone update the blog. I finally got some time today to plan a little on the baja between winterizing the sprinklers and trailer. I had to do a lot of shifting around today so I could put the trailer down the side of the house and get the driveway arranged. I had to change the oil on the truck also but I managed to buy the front end parts I need for the baja. I got all 4 ball joints, all the tie rods and picked up a couple o-rings I needed for the engine. I have a leak on the front of the engine and remembered about an o-ring that goes on the flywheel that I forgot to replace while I had it off. Dang it, That means the engine has to come back out. A minor set back but a set back all the same. I am really hoping to have it licensed in October. I am shooting for October so I can space out some of the vehicles registration months. It seems like all our vehicles are do right after Christmas and go until May. Anyways, I have no pictures to post but I will definitely get some during the front end rebuild. I also have a bunch of powder coating to do and hopefully I can get it done in the next 2 weeks. Until then I guess the baja gets to enjoy some garage time but if winter hits really soon, it will get kicked out whether it's done or not.
Posted by The Bug Boys at 10/15/2011 08:08:00 PM No comments: Links to this post