If you have read this blog lately, you know that I have been looking for a early 50's pickup truck. It will be used for my daily driver along with my 1969 Volkswagen Bug. I found the perfect truck for my needs. My Dad owned this truck a few years ago and sold it to a friend of his that he worked with. I was able to get his name from my Dad and I then tracked him down and found out he still had the truck and He was willing to sell it to me. I was excited so we agreed on a price and today I headed to Idaho to pick it up. I rented a
U-haul trailer with the hopes that the truck would fit on it and headed North. Here is the truck and my truck and trailer just after I pulled up. 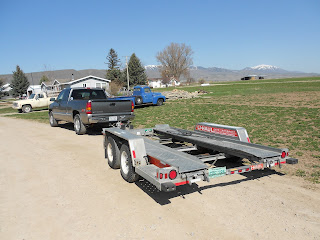 It is a 1952 International L-110. It was parked in 92 because the brakes were bad and it hasn't run since. It is definitely an old farm truck and has the dents to prove it. It was originally red and was repainted blue at some point. The patina on this truck is awesome. I am going to leave the body just the way it is except I might change the grill out and do something with the bumpers. The front one is pretty messed up and the back one is a homemade extra heavy duty one. It is solid but it looks a little big. Time will tell what happens to it. 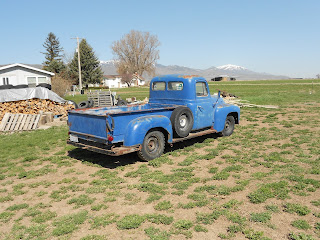 It took 2 come-along's and some hard work from Sol (the guy I bought it from) and myself but we got it loaded on the trailer. I strapped it down and it was ready for the 150 mile drive home. 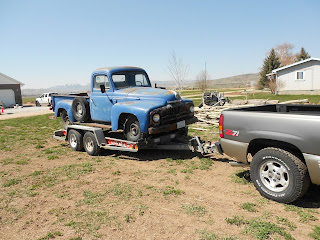 This is what I saw in my rear view mirror the whole way home. It's a great looking hood though. 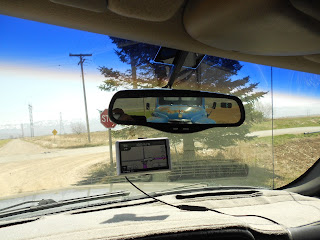 Here I am just about in Utah. The farms and land in Idaho is awesome. I would love to live in a place that has so much farmland everywhere. 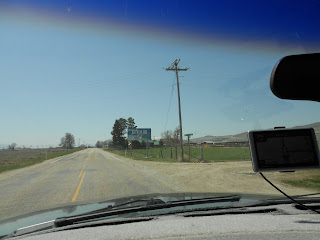 I made a stop in Logan to check on my parents house. The trailer pulled OK but it did have a little wobble at times. My truck pulled it without a problem and I could barely tell it was back there. 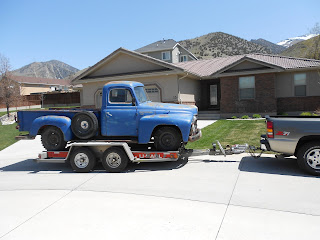 Ready to take off again for the ride to Salt Lake City. 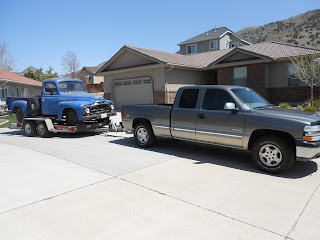 If you are wondering if a 1952 International pickup with a long bed will fit on a u-haul trailer, it does. (but just barely!) There wasn't much wiggle room for it and I imagine all the metal hanging off the tail of the trailer was what gave it the wobble at times. 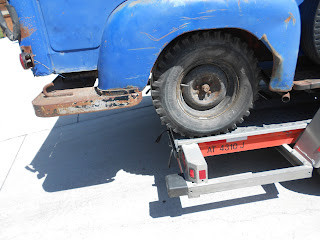 The running boards cleared the fenders with room to spare. When I lower it it will be a little tighter. 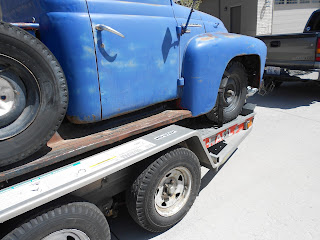 I have the front as far forward as it will go. I guess I could of put it on backwards and I would of been OK with the weight distribution but as it was, it towed pretty good. It never wiggled enough to make my knuckles white. 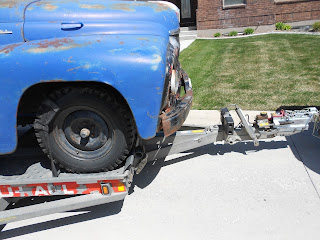 I got it home and Isaac was the first to greet me. I had him get up in the truck to put on the brakes when I pushed it off. I didn't tell him that the truck has no brakes. Ha ha Anyways I tweaked my back when I was putting  it on the trailer so I was having trouble getting it off by myself. Luckily my friend showed up and helped me push it off. He also helped me stop the truck from hitting my house when it was rolling. Thanks Ron, I couldn't have done it without you! 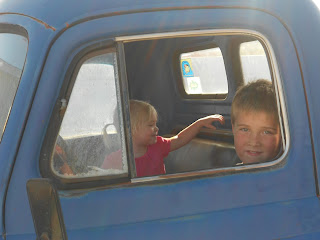 Ellie loves the truck. We had to deal with a huge temper tantrum from her when we pulled her out and told her she couldn't get back in it. Dixie blames me for Ellie's love of old cars and trucks. What can I say, She has good taste. Dixie thinks the truck is too big. I keep telling her with smaller wheels and tires and a lowering job, it won't look so big. Although with little Ellie in it it does look big. 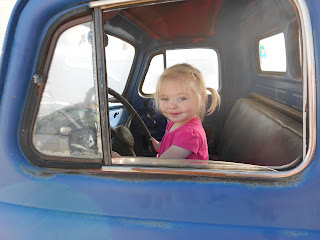 especially this picture of her in it. The funny thing is that inside the cab, there really isn't much room. 2 people sit pretty close to each other. I told Dixie that that will keep us close to each other. (always a good thing!) That's the same reason why I try to to take the bug when we go on dates. 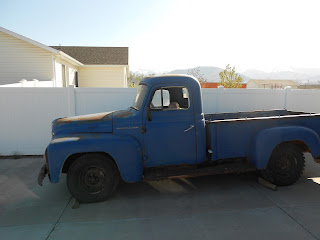 This is the dashboard. Not much too it, just the necessities. I will take some better pictures of the inside and the engine and post them up later. I am trying to nurse my sore back tonight and didn't feel like doing much more. It's been a fun, but long day. It would of been funner if my family could have gone with me. Maybe next time. 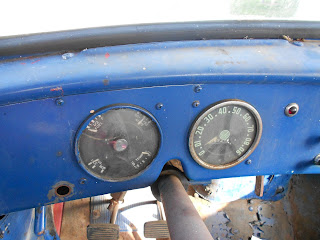 Check back and see the progress of the shop truck as it happens. I think I will try to get it running first, then we will go from there. Whatever happens to the truck, you can bet that it will be cool.
Posted by The Bug Boys at 4/26/2013 09:40:00 PM

I’m amazed that you really tracked down your dad’s truck instead of buying a new one or repairing your old truck. Your dad must be happy to have seen his old truck. And I guess he will be more excited once the repair and upgrades are done.

Great work on getting you dad’s truck back! With just a little bit of tweaking, I bet it will be perfect. Plus your kids look so adorable inside it! Thanks for sharing, and have a good day!