I had the wonderful chance to change the spark plugs on a 3 valve 5.4 Liter Ford Triton engine in the garage this week. I can't really figure out why Ford would build a 3 valve engine?????? and then decide to re-engineer a time tested spark plug that has worked great since the beginning of the automobile. Seriously, if you have a Triton engine in your Ford I would really think about buying a Chevy. If you are a ford guy through and through, I would at least suggest you change the plugs no later then 60,000 miles so you don't have to go through the stress (if doing it yourself) or pocketbook pain (if you pay someone) of changing the plugs. Here is the truck. It's a 2004 F-150 with 118,000 miles on the original plugs. 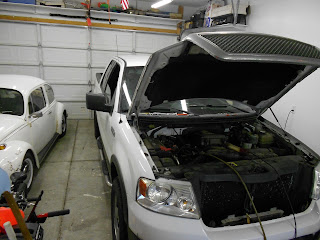 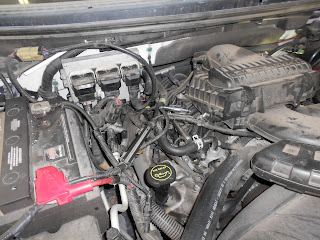 Here is the computer removed. Just set it aside somewhere where it won't get knocked around. 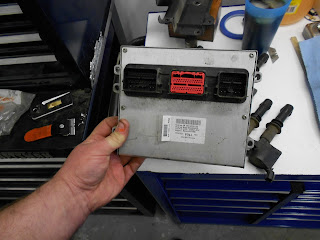 and here's the bracket. The bracket has 3 bolts that hold it on. The nuts are welded to the firewall so that makes it easy to remove. With those things removed you are ready to remove the COP's (coil packs). 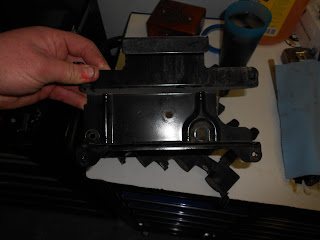 They remove with 1 plug for wiring and 1 bolt each. I mark everything so they can be installed in the same position that they came out of. Here is 1 removed. 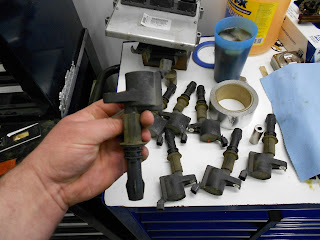 Here are all 8. You may want to do this a day or 2 in advance so you can spray penetrating oil down in the plug well to get things loosening up. I actually did this at 2 different times. I started this process 2 1/2 weeks ago before I left to go to Saint George. I pulled the truck into the shop on a Friday and removed the coil packs and sprayed the wells with Kroil. 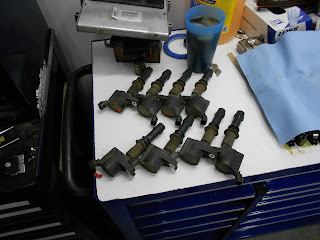 This is Kroil. It is the best penetrating oil I have ever used and I use it frequently at work and in the shop. It is hands down the best. 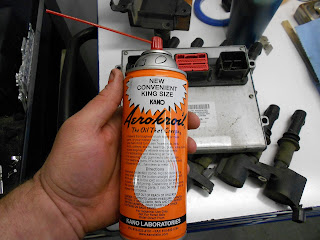 Let me tell you why I did this in 2 steps. I figured that with the time I let the kroil do it's magic that the plugs would come out without any trouble. That was just my wishful thinking I guess because the first plug I tried pulling out on the first Saturday broke without even attempting to come out. It was the forward plug on the drivers side. That is the easiest one to get to of all 8 so I wasn't too concerned. My friend had bought the Lisle tool beforehand in anticipation of at least 1 plug breaking. We figured that if we had the tool we wouldn't need it, but if we didn't we would. Anyways, back to the story. I watched some you tube videos and read the instructions on the tool and it seemed like it would be easy. Here is the tool. It has 2 parts to it. The first tool is used to push the ceramic down into the plug cap. The 2nd tool then self  threads into the broken piece. You then use a nut that has left handed threads and that presses the piece out of the head. Well the tool is great in theory but it does have it's flaws. The first thing I came across is that the part of the tool that self threads into the broken piece does not want to thread into the super hard material used to make the plug. I had to use a hammer and did a little hammering, then some twisting, a little more hammering and some more turning etc.... I did finally manage to get the piece out of the head and I then found the 2nd flaw of the tool. When you push the ceramic down into the sleeve it states in the instructions that you cannot push it too far because of the way the tool is designed. Well that is correct BUT it still pushes it far enough to pop off the strap of the plug and there was also little pieces of porcelain missing. I used a combination of tubes, grease, and a shop vac to get everything out of the cylinder. I also have access to a boroscope that I used to look into the cylinder. I didn't see any thing in the cylinder that concerned me so I installed the plug. This all took some time and I had been called in to work that night so I decided to call it quits for the time being. I had a lot of things going on in the two weeks following so I told him I would get back to it when I had some more time to do it. So that was how round 1 went. I had a good 2 weeks to mull it over and think about removing the other 7 plugs. Here is the Lisle tool that I used. 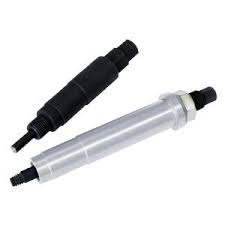 This picture shows a cutaway view of the tool pulling out the stuck part of the plug. You can see where it has been threaded into the plug piece and then when you turn the big nut on top it presses the piece out. 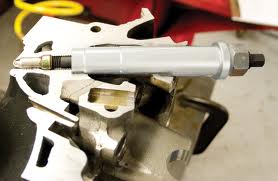 Ford actually has a TSB on how to remove the broken plugs. They use a little bit different tool that utilizes glue to remove the porcelain piece. They have a long step by step process that uses carb cleaner to soak the plugs in. If you look on the Internet you will find a hundred different ways to remove these plugs also. Here is 1 you tube video that uses the lisle tool. There are people that use impact guns, heat, different ways of moving the ratchet and a hundred other ways to remove them. It seems like some get lucky and don't break any of them and then others break all 8. I think it all depends on the mileage of the engine. All I knew was I did not want to have to remove broken plugs from the aft 2 plugs that are basically under the firewall.
Fast forward to yesterday. I finally made it home from about 2 weeks on the road and decided I had lost enough sleep thinking about these plugs and the owner had taken a vacation so I had the truck to work on. I started on the passenger side first and was so very happy to see this picture. The first one came out nicely and I could smell kroil on it from when I sprayed it down 2 weeks before. Here it is. I was really surprised to see how much it was worn. This picture shows the difference between the new one and the old one. I changed my Chevy trucks plugs when it had 112,000 miles and the plugs I pulled out looked as good as the new ones I was installing. I figured these would be the same but that is not so. The gap has to be almost double what it should be. I was lucky on the passenger side and all 4 came out. I was feeling pretty good having 5 plugs done and only 3 to go. 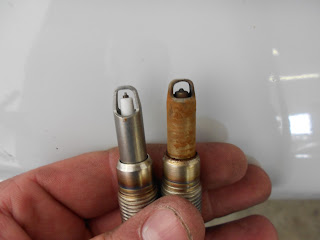 I then went to the drivers side and pulled the next one. It came out a lot harder then any of the passenger side plugs did. You can see the carbon buildup on the plug and how the kroil softened it up. I then went to the 2nd from last plug on the drivers side and it broke on me. I was really bummed because it broke and I still and the hardest one to do. I used the tool to remove the broken piece and it worked. It was still hard to get it to start threading and I had to use my rivet gun to get enough pressure on it to bite. It came out the same way the other one did so I got my hoses and shop vac and cleaned out the cylinder the best I could. 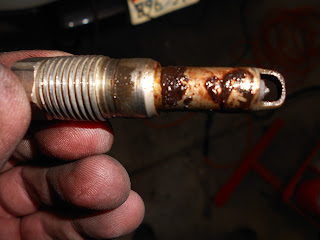 I had 7 down and the hardest 1 to go. I said a prayer and very slowly pulled it out a little at a time. You can see in this picture how carboned up it was. It was truly a miracle that it came out without breaking. 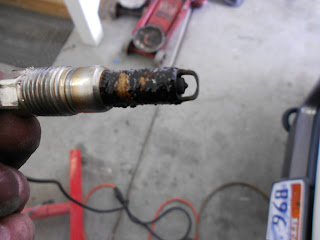 Here are the 2 that broke. They are a 2 piece plug and they are only crimped together. You can see where the crimped side splits and the long piece ends up stuck into the head. 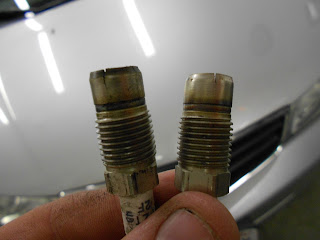 Here is the piece after removal. If you are unable to get this out you are removing the head which turns a basic tune up job into a high dollar job. It is usually at this point that I say all engineers should have to turn wrench's for an internship so they can better design things, especially when it is a normal required maintenance item. 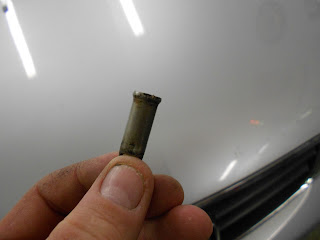 Here's all 8 plugs removed and on my cart. 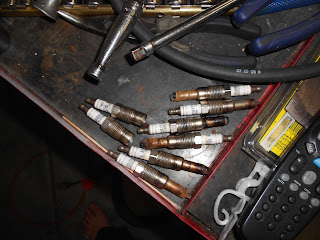 When you install the new plugs, you must use NICKEL anti seize. That is what Ford calls out in their TSB and will hopefully prevent problems in the future. The anti seize you can buy at auto zone or o'reilly's IS NOT nickel. You must get it from the Ford dealer or a specialized store like grainger. 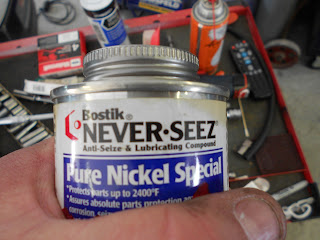 Ford recommends putting it on the metal part of the sleeve but not over the cap. They do not say to put it on the threads but I put a small amount on the lower portion of the threads like you can see here. 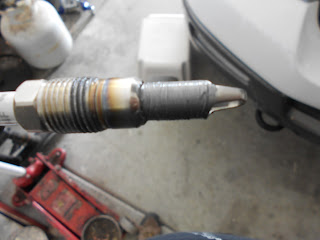 I was glad to get this job done and I am not sure I would do it again unless the engine has a lot less miles on it. If the tool worked better and didn't push anything into the cylinder It may not be too bad but it definitely is a stressful job especially when they break. I think I got really really lucky that only 2 plugs broke. I really feel for those that break all 8 or break the ones closest to the firewall. Good luck to any that attempt to change these plugs. Remember that time is your friend when doing it. Heat and a good penetrating oil is a must. I found that the passenger side plugs came out pretty clean while the drivers side all had bad carbon buildup. Not sure why that was either. I also think if you were to get a professional fuel injection cleaning beforehand it would help greatly. There's still 3 more big projects lined up for Olson's Speed Shop so keep checking back.
Posted by The Bug Boys at 4/05/2013 11:42:00 PM