Saturn needs rings, and then some!

I got the Saturn pushed into the garage so I could evaluate it. It had a suspected broken timing chain so I had  boroscoped it and found a damaged piston. The compression was zero on 2 cylinders also so I decided to remove the engine so I could pull the front cover and the head off to get a better look. I figured it was easier to just pull the engine than try to do everything in the car so out it came. Here it is just after I pulled it into the garage. 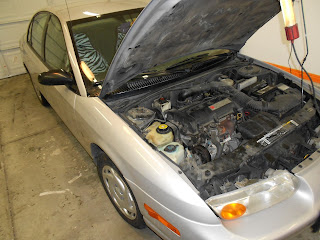 I removed the hood first for better access and light. 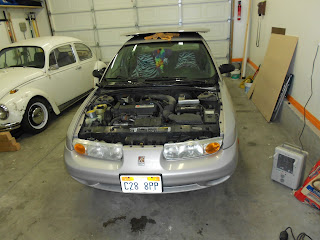 This engine removal is pretty basic. The manual says to remove it from the bottom along with the transmission, a arms, steering and sub frame. I decided to remove only the engine and do it from the topside. 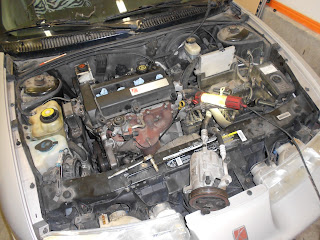 Here I jacked it up and removed everything I needed to from underneath the car. I also removed the crankshaft pulley to have more clearance since I was leaving the transmission in the car. 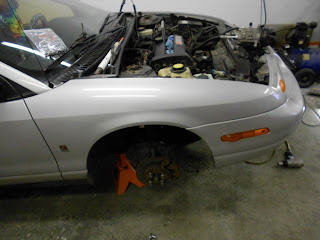 I was going to try out my new and improved load leveler but I got worried that I wouldn't have enough height to pull the engine because the car was jacked up so I ended up using a regular old chain. The chain worked just fine. 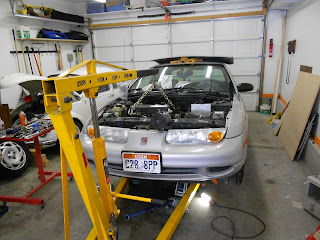 It came out really easy. I even left in the radiator and electric fans and had room to spare. 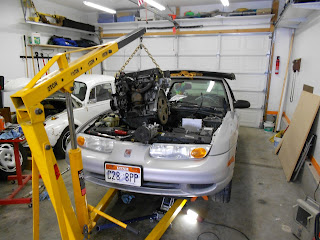 A different angle of it coming out. 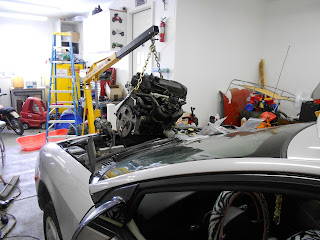 The only thing I would do differently is to pull the starter. I debated on pulling it but it's in a pretty tight area and I decided not to. That made it a little tight in that spot. I think it would be worth pulling it out to gain the extra room there. I will pull it before I put it back in and just install it after the engine is in the car. 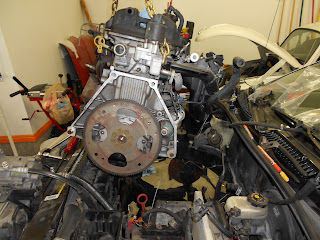 There is the engine compartment with the engine out. I used a strap to hold the transmission up and put the tire back on so Dixie could have her garage back. That was the other reason I decided to remove just the engine. 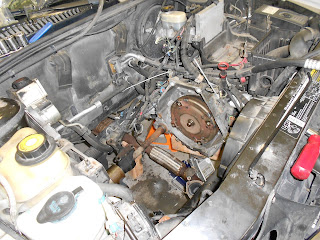 I think I would of had enough height to use the load leveler. Maybe I will use it when I put the engine back in to test it out. 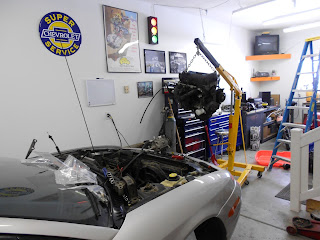 I got the engine on the stand. It's much better to work on it there then when it's in the car. 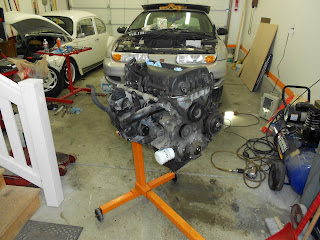 As you can see, the chain is intact and it was tight. I still had zero compression on 2 cylinders so the head is coming off anyways. 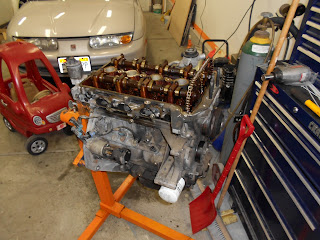 The timing chain is complete and the tensioner seems to be in OK shape. 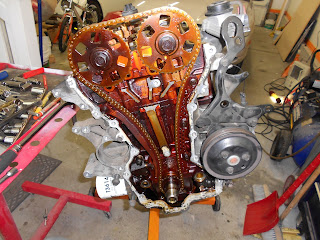 I removed the timing chain and the cams. The head is ready to come off now. 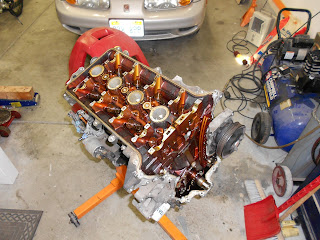 It's important to keep all the cams and rockers in the same positions that they came out of. Here they are all placed in order of the way they came out. 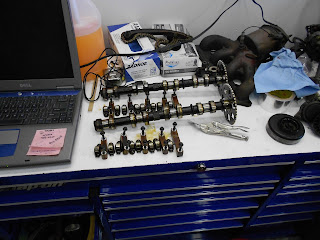 Here is the damaged piston. Its damaged down to the first ring. There is no sign of any impact damage. The piston is very clean so it makes me think that that cylinder had not been firing for awhile and the raw fuel has cleaned the cylinder off. 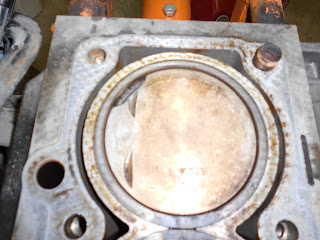 Here is a shot of all 4 pistons. You can see how clean the one on the left it. I actually cleaned the one on the right a bit and that is why it looks cleaner then the other 2. I found the head gasket to be blown which may account for some if not all of the problems. 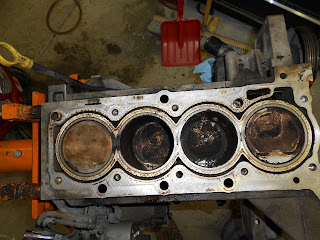 Here is the damaged head gasket. That explains why there was no compression in those 2 cylinders. 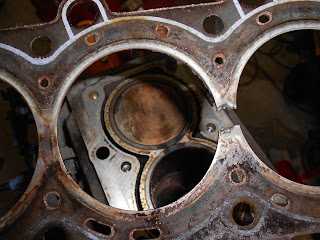 You can see the blow by between the 2 cylinders here. 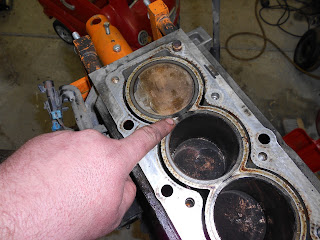 I checked out the cylinder walls and they look absolutely fantastic. There are no ridges on them and the hone marks are still visible. The engine has 140,000 miles on it so I guess it's decision time. The owner doesn't want to spend a lot of money on it so he has to choose whether to try to put a junkyard engine in it or fix this one. If we fix this engine it will only be a piston and then put it back together and hope for the best. So until the decision is made this is how it sits. 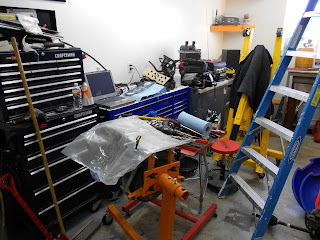