On Monday I ordered all 4 struts, strut mounts,  stabilizer links, bushings, front bellows, intake gaskets and the valve cover gaskets for Dixie's van. I need to change the struts and adjust the valves on the van. I received all the parts I ordered via Fed Ex on Friday. I took Ed down to get the safety and emission inspections done this morning  and then helped Dixie at a yard sale she was participating in. We all just managed to get wet at the yard sale. I came home and with the rain my motivation level was pretty low. I finally dragged myself out to the garage in the afternoon just as the sun came out and then it was decision time. Here are the struts for Dixie's van. KYB was the best option available on the market. 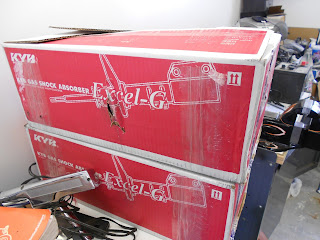 Here was my dilemma. Work on the van OR work on Ed. HMMMMM, Decisions, decisions! 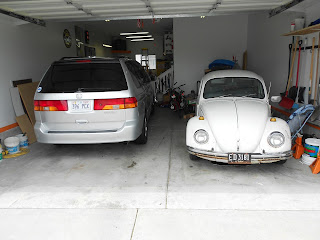 This was a no brainer. Ed's front end really needs to be changed out so he can get his cool stance back. I bought a 2 inch narrowed front beam with adjusters a couple months ago and I was just dying to get it installed. Here is how Ed is sitting right now. If you haven't been following this blog, Ed is my bug and he was a lot lower before. I had a stock width front end that had adjusters in it and lowered spindles. It was as low as I could go without rubbing the front tires. I ended up hitting a big metal plate that construction crews used to cover holes in the road temporarily and it bent the front beam. I wanted to get back on the road fast so I picked up a beam without adjusters, put on my lowered spindles and pulled some leaves out of it to try to get it lower. It was OK, to high for my liking but at least it got me back on the road. I had a complete front end with lowered spindles and adjusters kind of fall into my lap so I snatched it up and here we are. 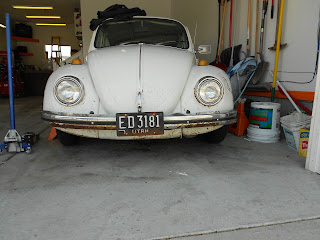 Right now I am sitting about 6 1/2 inches off the ground with the front apron. It will be interesting to see where it will sit when the new beam is installed. 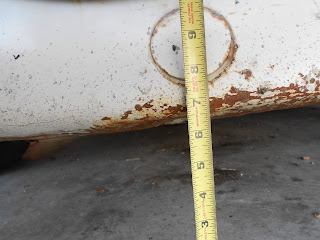 I wanted to get the old beam out so the car will be ready for the new beam. The first step is to get it up on jack stands and pull the wheels off. 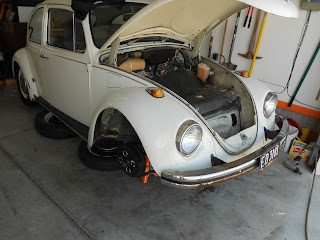 I purposely ran the gas tank down to where I was running on fumes because I knew I was going to pull it. That's the next step. Don't try to do it with the gas tank installed. It is a lot easier and faster to just remove the tank. Ask me how I know that! Ha Ha. With the gas tank removed you have access to the steering coupling, tie rods, and steering stabilizer. 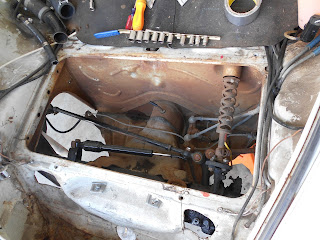 Remove the tie rods, stabilizer, and disconnect the steering shaft. 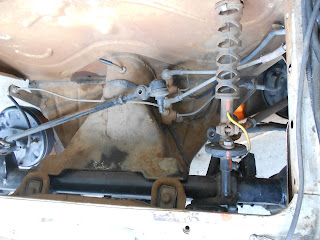 Remove the shocks. I am going to run my lowered spindles so I pulled the torsion arms out of the front beam and left my brake line hooked up to make it easier. If you plan on doing this, you need to disconnect your upper ball joint. The lower ball joint will remain connected to the spindle and drum. 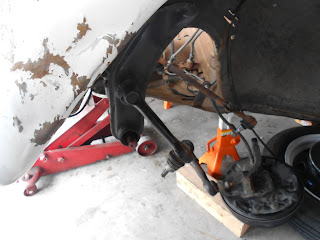 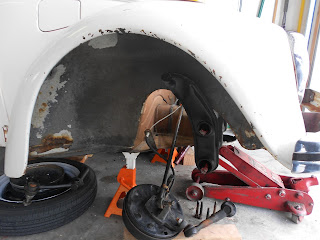 I find it easiest to grab the beam by the shock tower and lower it with the jack. Make sure you pull it forward a little bit to clear the frame head. It's pretty light so it should come out easily. Here it is lowered and on the ground. 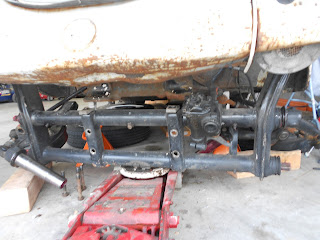 Now just drag it out from underneath the car. Easy as pie. 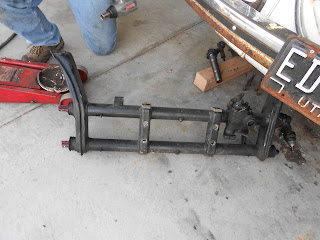 I need to get the other beam ready to install by switching over the steering box and installing the torsion leaves. 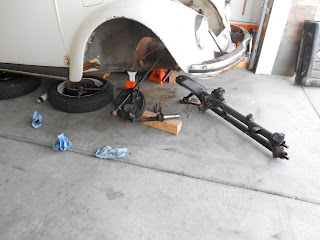 Now I did do SOME work on Dixie's van. I replaced the rear shocks. I am actually putting off changing the front struts because my alignment shop can't get me in for an alignment until June 13th. I don't really want to drive for a month without an alignment. I figured the rear shocks would be OK to change. The rear shocks on this van are as easy to change as the rear brake pads. Super, Super Easy! Jack up the van using the side support that is meant to be jacked on. Throw a jack stand under it and remove the wheel. Next remove 1 bolt and 1 nut from the shock. 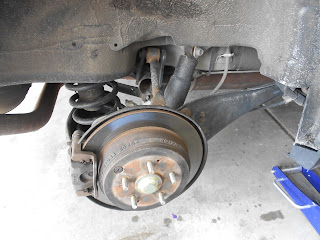 Here is the bolt. It is on the top of the shock. The nut on the back is welded on so don't worry about putting a wrench on it. 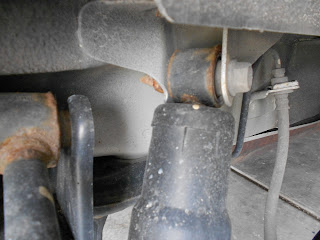 Here is the nut. It is on the lower side of the shock. Keep an eye on which way the washer is facing so you can put it back together correctly. If your lucky like I was the shock should come right off. If your unlucky it might be corroded on. If it is use some penetrating oil and a little persuasion to remove it. Our shocks weren't in terrible shape but there were enough miles on the van that they needed to be changed. 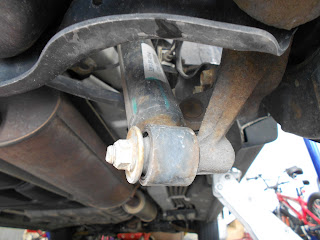 I used a corrosion inhibitor on the bolt and bottom support so if I need to do this again in another 110,000 miles the shocks will come off. I installed the bottom part of the shock first and then jacked up the axle just a little bit so everything would fit nicely. I then cut the strap on the new shock and guided it into the spot and threw the bolt in. Torque both the bolt and the nut to 47 foot lbs. 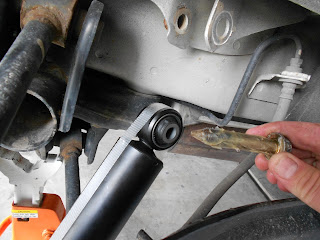 Here is the new shock installed and ready to go. Throw the wheel on, torque the lug nuts to 80 foot lbs, and take it for a test spin. Some people complain about the KYB's being kind of stiff. I thought they felt great. 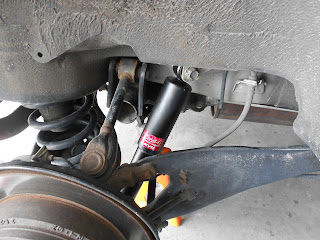 The front struts are the ones that really need to be replaced. The strut mounts are making noise and the struts are pretty bouncy on certain roads. I will be changing them in a couple weeks. It doesn't look like it will be a bad job to do. I have a good spring compressor so that makes things a lot easier. Check back to see which gets done first. The car or the van. Ha Ha.
Posted by The Bug Boys at 5/18/2013 11:17:00 PM