What the heck is up with the weather! I hurried and got the baja bug going so I could keep driving a bug all year long. As it turns out, (so far at least) I could of just kept driving my lowered bug. Here in Utah we had the lowest amount of precipitation in December ever recorded. We had another record of the warmest day in December ever recorded and as far as I can tell, there is no good (bad) weather forcasted in the future. I am going to drive my lowered bug to work this week and hopefully that will make mother nature change her mind and decide to snow. Just for the heck of it I may wash and wax all my cars and see where that gets me. We had a week of colder weather where it dipped into the teens at night and that motivated me to fix my choke and install an oil heater on the baja. It really helps getting it warmed up quicker. (Not that I've needed that lately.) Anyways, I was going to show some pictures of the oil heater I installed but my camera froze up on me and I can't seem to get it to work. I also replaced the hood hinges on my hood. My boss made fun of me for my bungee cord tie down that I rigged up so I fixed it right. I did manage to get some pics of that so here you go.

This was my fix for the broken hood latches. It worked really good. 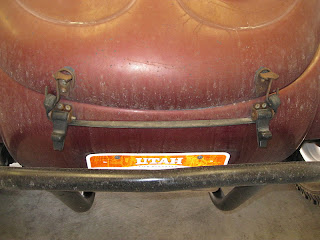 I drilled out the upper bracket on one side and then realized how crappy the new brackets are. They are a lot thinner so I just changed out the rubber pieces and kept the old brackets. I can't stand the fact that you can't buy good quality stuff anymore. Everything has gone very cheap. I will save that rant for another post. 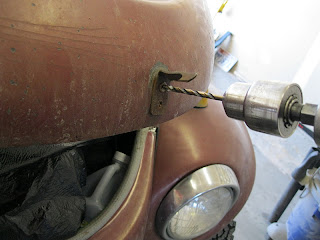 Here are the new hood hinges. Now my boss can't make fun of these. There are still plenty of other things he can comment on though. Oh well, one thing at a time. 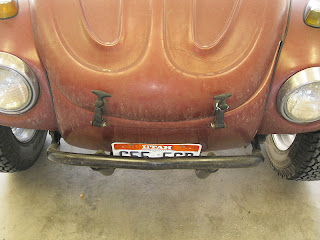 Looks like my snow dance worked. Too bad I'm so busy helping with science projects that I don't have time to play in it.